That is all fellow yotes'

Since NHL 17, I’ve been making a team called the Scottsdale Sea Dogs, and this is their arena. But, since NHL 23 didn’t make Mullett Arena, I decided to have the Coyotes at the Sea Dogs arena.

My dad served, so thought it would be a good idea. One for us each😏

Searching for hat. Anyone know where you can find it for purchase?

Jakob Chychrun is Back; Is it Time for the Arizona Coyotes to Trade Him?

shop.nhl.com has reverse retro's, possibly 30% off for black Friday with promo code NHLBF

There is a promo code for 30% off that isn't supposed to work for jerseys, but I got 30% off on a reverse retro tonight. So if you're quick before they notice their mistake...

I'm traveling to mullet Arena for the Dec 9 game. What's the deal with the players entering and leaving the arena? I feel like with the small size and apparent lack of a tunnel that the players will have to enter and leave through an outside area. Is there somewhere the fans can wait for possible autographs?? Thanks in advance and excited for my trip out west!

I'm trying deseprately to find a Coyotes hat online and i cant seem to find it anywhere online..

Does anybody know if this are such thing as kachina logo 9fifty new era snapbacks ? I'm oddly specific in reason of my prominent head size and these are the only ones that fit me :/

I thought, maybe you locals have shops around and would be willing to help one of the not so many European long time Coyotes fans :P

The man had a 36 save shutout. Can you at least get his picture right.

Shoutout to stecher. Tough as nails 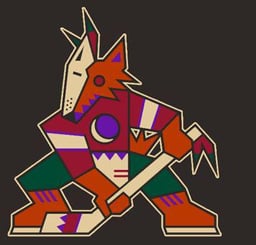